Bonjour! Stage 8 took place in the heart of the Pyrenees with four Cols to conquer! The Col du Tourmalet fell victim to Thibaut Pinot and Rafael Majka but thereafter, Team Sky launched their predatory attack on the race. They caught, they passed and then in a move, that looked to be inspired by Stephen Cummings yesterday, Chris Froome powered away in the most extraordinary descent. He was amazing, his long arms and legs made him look as though he was on someone else’s bike! Quite simply, he was brilliant, taking the stage win and with it the Yellow Jersey. Familiar territory for him, can he hold on to it until Paris? It’s a long way to go! Here are my drawings: 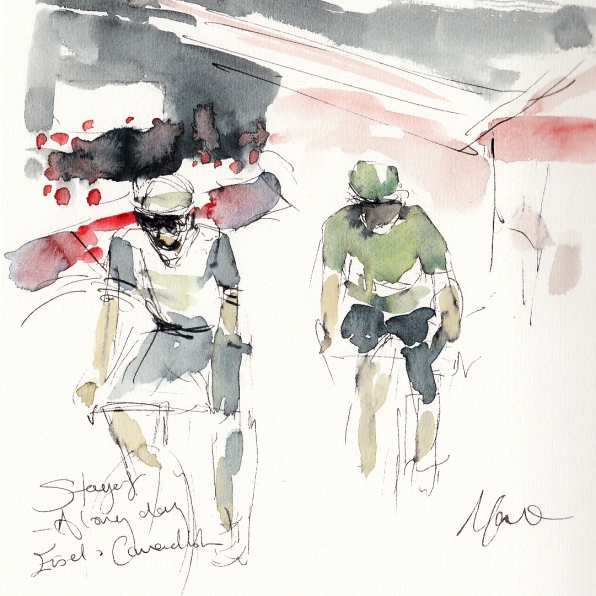 A long day! Eisel and Cavendish

Who is it that rides like that and pedals from that position?

Pinot and Majka cross the summite of the Tourmalet

Sky boys on my shoulder 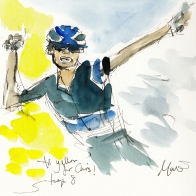 All yellow for Chris!

Fans on the mountain, Chris makes his move!

Prices and sizes for pen and ink/watercolour drawings start from £125 for 4″ x 4″ mounted original, 8 x 8 and panoramas from £195 – Framed works start from £200.  Larger drawings and paintings quoted individually.