Saturday also saw the Women’s race, La Course – usually the precursor to the men’s last stage in Paris, this year it opened the racing in Nice. The rain held off and an absorbing race took a circuit round the city of Nice and out into the surrounding hills.

This image shows the finish, which saw a great win for Lizzie Deignan – it was so close between her and Marianne Vos – and really exciting to see these two great champions wheel to wheel.

Surely there has to be a Tour for women sometime soon? I was surprised that the next day, BBC Sports news reported on the Stage 1 win for Alexander Kristoff, but failed to mention this victory for a British woman – Political correctness? Plenty to discuss!

Bonjour! La Course at Le Tour de France is a new women’s race initiated last year to great acclaim. It precedes the final stage of the men’s Tour and provides exciting racing on the Champs-Élysées. The racers include the best in the world today (including some from the Women’s Tour in Kettering only a few weeks ago). The conditions were simply awful! The rain was torrential and the roads treacherous. The sprint to the finish saw the win for Anna van der Breggen, a worthy winner. This was an outstanding race, amazing to see.  Here are my drawings:

Slippery on the pavés, La Course 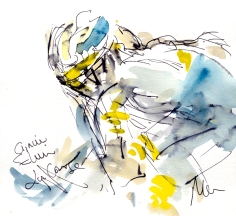 Carnage on the streets, La Course

Prices and sizes for pen and ink/watercolour drawings start from £125 for 4″ x 4″ mounted original, 8 x 8 and panoramas from £195 – Framed works start from £200.  Larger drawings and paintings quoted individually.