Stage 21, Paris. The flag that flies suspended from the arch of the Arc du Triomphe, is a favourite element of the Paris stage, as is the monument at the top of the Champs Elysee itself. It’s great to see the peloton hurtling round this iconic landmark. It’s been a heck of a race this time, so much to take from it, as ever. The only sad sight to see this year for me, a final podium with two riders and two mannequins wearing the jerseys that Pogacar had won but couldn’t put on. Is that a worry? I hope not… I shall be back again next year to find out!

Picture info: Original watercolour with pen and ink on paper

Stage 21 – Paris, and the one where Mark Cavendish breaks Merckx’s record and wins 35 stages….but sadly the fairytale finish wasn’t to be. The stage began well, but towards the climax, Cavendish became separated from his lead out man, and instead took up position on the wheels of Wout Van Aert. He was side by side with Jasper Philipsen and couldn’t get past. Van Aert took his third stage win with phenomenal strength and Cavendish slapped his bike in frustration, knowing he just missed out.

I was very sorry about it but it was still an outstanding race for them both. Van Aert crossed the line with three fingers aloft. Cavendish can hold three fingers on one hand and four on the other if he chooses, which is wonderful. He won his second Green Jersey, a great souvenir of his outstanding Tour performance. He is the greatest sprinter of all time, it’s official!

Stage 20 – Tadej waits to start his time trial. He is in yellow and has been for so much of the race. He has made a remarkable start to his career, raced two Tours de France and won them both, not to mention his other achievements. This view shows just how young he is, but at just 22, he should have the prospect of a great career ahead.
The great thing for me as a fan, is that he isn’t the only one. The performances of Wout van Aert alone, show great strength, Jonas Vingegaard has been a revelation too. There seems to be a new generation coming through who are extraordinarily talented and young with it.
Exciting times ahead…

Another little study from Stage 18 that I like because of the peloton taking a bend, always love to see it and draw it – This town was attractive too, very French even down to the ‘Tabac’ sign – beautiful!

Original watercolour, with pen and ink

Stage 18 – A little study from Stage 18 that I like because of the flag – It shows a breakaway with riders from B & B Hotels, with a glimpse of Julian Alaphilippe behind 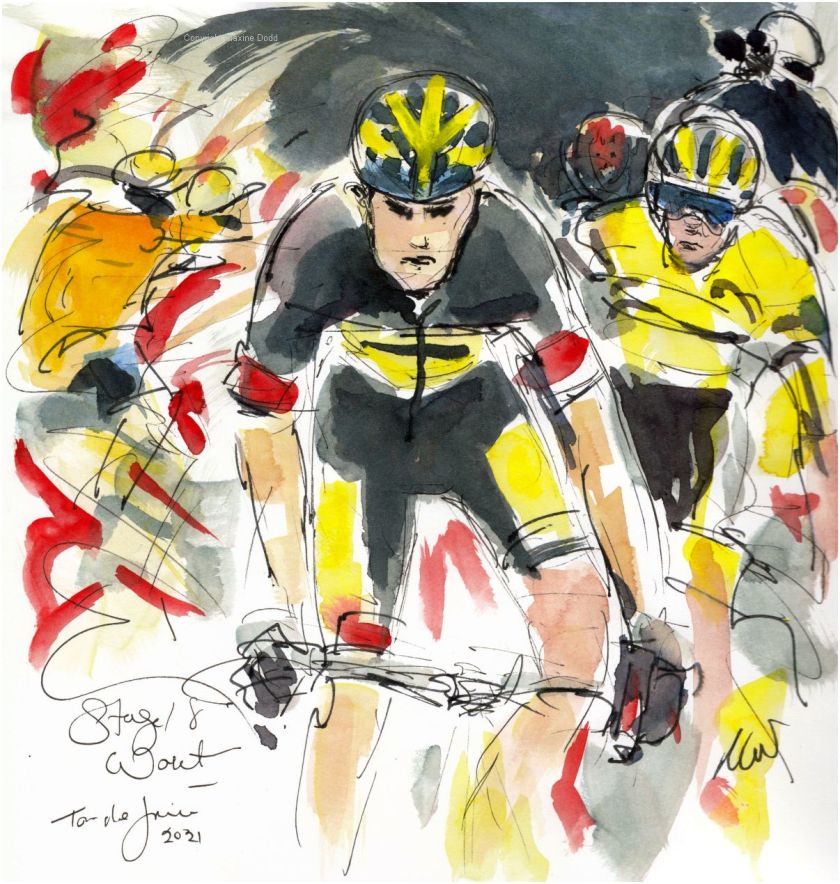 Stage 18 – and a view, (finally!) of Wout Van Aert, who is such an accomplished cyclist – he can do anything – with his sights also set on the Olympics soon, but he seems to be able to do anything, from climbing to sprinting and of course, time trialling, this multi-talented Belgian rider is a joy to watch!

Stage 18 – The last day in the Pyrenees and what a gruelling few days it’s been! Everyone pushed to the absolute limit – Here is a scene reflecting how hot it was and the descent – Jackets flying in the breeze – probably not the best aerodynamics but probably felt very good!

Stage 17 was a complicated one with lots going on – especially at the end – and yes, I’m still working on those images!

Here though, is a little panorama that I quite liked which shows a lot of polka dots as the King of the Mountains, Wout Poels climbs the Col du Portet – a very, very tough day.

Stage 17 was a complicated one with lots going on – especially at the end – I’m still working on that! However, the stage also fell on Bastille Day and this image was lovely to make because two French riders from two French teams lead the race at least for a while.

The flag in the crowd was big, but I confess that artistic licence took over a bit here… One of my favourite paintings ever, is Delacroix’s ‘Liberty leading the people’ – and it has a great big flag which means so much to the French people, but to the wider world as a symbol of freedom in all forms.

Some days, just like the riders, you just have to go for it!