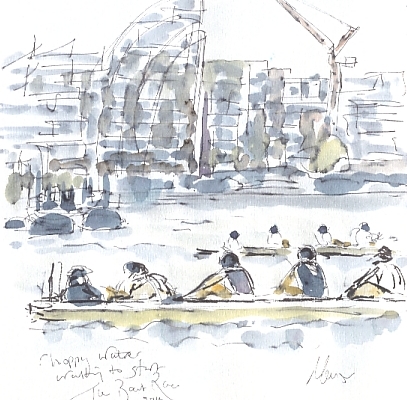 Hello! Following on swiftly from one of the world’s oldest horse races, came one of the oldest rowing races – the battle on the Thames between the crews of Oxford and Cambridge Universities. It is an international event these days and its 160th running attracted a huge audience, not only on TV but every square-inch of land on the riverbanks and bridges lining the route. People must have glimpsed the boats for a few seconds as they went by. The skies were grey, the river choppy and for Cambridge fans, a slip in the water barely five minutes into the race sealed their team’s fate….

Another great day of sporting excellence. No medals for Team GB but still wonderful performances by all athletes. Drawing so many sports makes for a different challenge from following one. For example with diving, I had to show the progress of the dive in the one drawing. It is two views of the same dive. Here are a few impressions some of the day’s incredible variety of sport.

A bit late to the party…

But what a party?  The Olympic Games has been wonderful so far – a delight. I’ve been drawing on and off since the Games started, but a bit late posting to say the least! I hope better late than never. There’s so much happening, it’s impossible to cover it all but I will do what I can. Here are some drawings to start with from an amazing few days in London.

All pictures shown are original hand-drawn artwork and, as such, each one is unique. They are not reproduction prints.

Mount and/or frame increase the size of the finished piece by approx 8cm (3in) on each side.

Carriage for framed pictures £25 to UK

Outside UK, both quoted separately for your location..